Our man Christian is in the field going westward, but not before completing his first ever Iron Butt Association's Saddle Sore 1000 (That's 1000 miles in 24 hours). His course yesterday was Red Wing to Pueblo, Colo. Christian made it in fine form, and even found the time to write about the experience. He now joins the company of manly men and will earn braggin' rights at the next party. Here, without further ado, is his tale:

Well, I did it! It wasn't too bad either. The only hiccup was when I tried to leave at 0430. I kept remembering things, and couldn't find the spot etc., so I didn't roll out until 0515. First order was to get a gas receipt, so I went to Joe's Mobil to get the non-ethanol-stuff. First thing I noticed was that my remote heated liner n glove controller wasn't working.... Great, batteries are dead. I figured I will stop by home and change them as I have some in a drawer and I need to unscrew a cover to get at them. If I were smart I would have checked this the night before.
So. Joe's. The pumps are on, but it wasn't until I had run my card and tried to put fuel into the tank that I realized I had to lights. I was filling in the dark! Thus, I rammed the nozzle all the way down and hoped the auto shutoff worked. If I were smart I would have gone to another gas station and not risked gas in lap. But it worked, partially filling my tank, but I didn't get a receipt because I wasn't quick enough to push the requisite button. Dammit!

Ok. Batteries. It was 55-degrees so not totally necessary to get the liners working, and I still needed a receipt, so I resolved to just stop at KwiktTrip and get both. Done. On the road.

Of course it got colder, 43-degrees by the time I was on I35. Still ok though, the long undies and wickers turtleneck and the heat from the FJR was sufficient, and with no remote the heated gear reverts to 1/3 power. I wasn't totally comfy, but enough to avoid stopping just to swap batteries. As dawn was .. um ... dawning... I figured it would get warmer.

At the Iowa welcome it was only 45-degrees and I changed the battieries. Only thing is I bought AA and needed AAA. I had two partially used AAA (a duracell and a super pricey lithium) so I put them in. This will bite me later.

And so I traveled around Des Moines and snacked on a granola bar and a banana. In Omaha I changed to shorts n a tshirt, and opened a 10 year old mre.... ewwwww the grilled hamburger patty had leaked all over. Garbage! I ate some beef jerky instead. 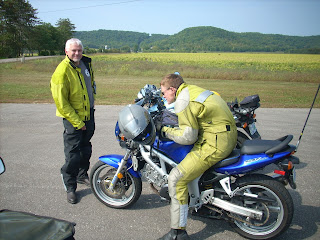 And on I rode, through Lincoln, Kearney, and it was pushing 86-degrees. The FJR was running great, engine purring and the suspension soaking up the road. I tried to keep it at 83 mph but would occasionally find my speed creeping up 95. Yikes! Lots of enforcement in Nebraska ans Colorodo.

Surprisingly I was not tired. The beaded seat cover worked great with the target-brand wicking performance briefs and about every 30 miles or so I stood on the pegs. Also did my physical therapy on the bike to keep my lumbar limber (so if you see me hump my gas tank, you'll know its not just love for the Yamaha....)

In Colorado I realized that I would not make it to Pueblo KOA before their offfice closed at 7 pm so called them and asked about a late check-in. I figured I could always scare up another camper for a signature. But Carolyn said I could call their number and they would walk over and be witnesses for me .... sweet!

And so I rode, mile after mile. I passed through Aurora while, coincidentally, I was listening to a podcast (APM's The Story) talking with a high school chem teacher who was at the high the day of the theater shooting.

The interstates flowed smoothly at 80-85 mph. The pavement was perfect. I was on I470, a toll road with license plate readers. If all toll roads were like this I would so totally support them, as opposed to the ones out east which you pay a fortune for, dig for change, and then dodge potholes.

As the sun set behind the rockies the temps dropped quickly and I needed fuel and more layers. But once off the interstate the road quality tanked and speed limits were redonkuously low. But I was on the home stretch.

Ok the batteries in the remote heat controller have run out. Dammit!

And then I lost audio on the right side. Dammit! 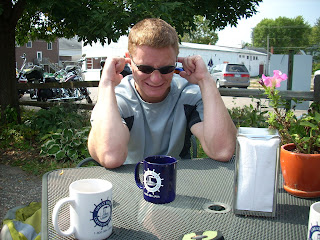 As I neared the campground I thought, ok I should get a final receipt. So I rode four miles past the Pueblo KOA into Pueblo, found a gas station and bought a banana. Back outside I couldn't find my keys... dammit! I went back inside and the attendant had them. Whew! Back to the campground. I started to smell race gas....

Carolyn and her husband were waiting there, ready to be my witnesses and they even upgraded me to a cabin so I could 'get a good rest'. That was awefully nice of them! Walking to my cabin I realized there was a racetrack across the highway... aha! The cabin blocked some of the noise.

So now I am just as tough of a rider as y'all!