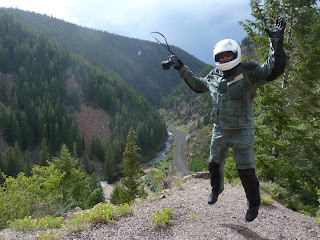 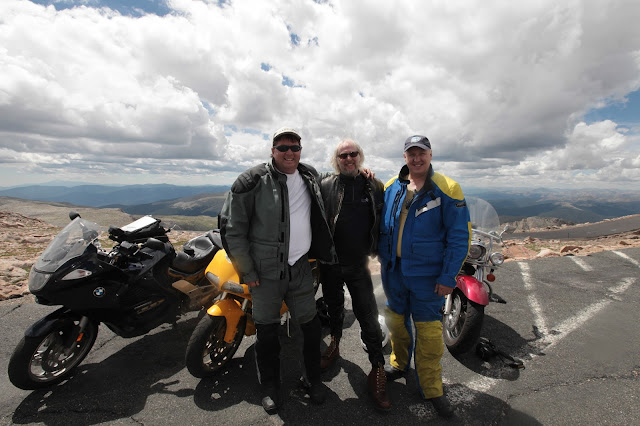 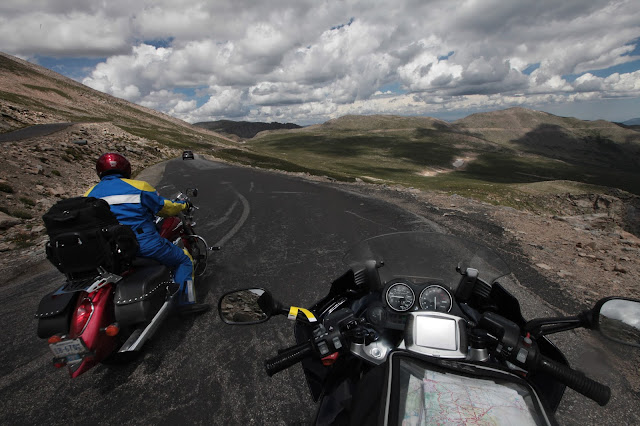 What follows is a day by day diary compiled by Mark:


Day one --  I slabbed it to Fairmont to meet Neal and Brett and from there we dipped down and rode across northern Iowa, southern South Dakota before spending the night at the Indian casino in Niobara, Neb. Crossing the Missouri River at Yankton, SD into Nebraska was gorgeous. For me it was about a 650 mile day.

Day two -- We road across the northern edge of Nebraska on the Outlaw Train & Bridges to Buttes Scenic Byways. People joke about Nebraska, but along the rolling hills nestled alongside the Missouri River was fantastic. We were usually at least 40 miles between gas stations. Not a problem for me, but we didn't gamble on the 160 mile range that Neal and Brett have. We then dropped down to Carhenge in Alliance, Neb. before making it to Denver for two nights.

We rode in temps from 58 to 97, sun, showers, torrential rain and hail this day. All fun.

The Aerostich is perfect for this because it might be raining on one side of the mountain, cross the other side it'd be sunny. Like that all day long. The day ended in a downpour so fierce I just couldn't see anything. We were too putzy and missed the post-ride dinner.

The cattle standing on the road coming around a bend was interesting. Happened a couple times. Open range.

Day four -- This was our exploration day. It's hard to say what the highlight was, there were so many. One was the 14-mile-long road to the top of Mount Evans, the highest paved road in North America ending at about 14,200 feet. No guardrails, narrow road, amazing views. I was light-headed just standing up there. Neal and Brett overcame their reluctance of going to high up places. Lots of amazing roads to ride hard and fast. A few were clogged with traffic and it was hard to pass. About a 325 mile day that ended in Fort Collins, Colo.

Day five -- Hopped on 75 miles of slab to Cheyenne, Wyo. before going across Wyoming. Went past sign that said next gas 72 miles. Saw armored Humvees checking on MX missile silos in the middle of nowhere, the dashed across Nebraska before making it to Assman Implement in Mission, S.D. five minutes before closing. Neal talked farm with them for 30 minutes. Bought hats.

We were going to follow the Missouri River for a while, but it started to get dark and animals were crossing the road so we popped up to I-90 and spent the night in Kimball, S.D. We took the last three rooms. Everyone else was either headed to Sturgis or on their way home.

Day six -- The forecast was for storms and we didn't get as far as we expected the days before so we reluctantly slabbed it back 620 miles.