Son of More from Tuk

It was cold and wet in Hyder, and a little fog and a few clouds on the top of the mountains, but that didn't stop me from enjoying the views. Once out of the canyon we continued on hwy 37 north. The road went through some provincial parks packed with mountains ... we road for hours, about 400 miles, and the whole time we were surrounded by tall mountains, riding through one valley after another. There were a couple towns, very little traffic, on a road straight enough to support 100kph but curvey enough to be interesting. This is our fourth day riding through British Columbia ... the distances are staggering.
We saw another black bear on the road and I turned my blinker on at him (BMW joke ....) ... he didn't care.
In Dease Lake we got the most expensive fuel yet ... $165/100L, which works out to be $4.74/gal. At least I'm getting 42mpg.
As we approached Watson Lake (our goal for the night) the terrain leveled out and we entered the Yukon Territory. yay! This is my first time here.
It was cold and it threatened to rain, but a couple motels were charging $130 for mediocre rooms. I declined and we went to a $12 campsite where we proceeded to swat at many lazy mosquitoes. I had impregnated my long underwear, pants and fleece jacket with permethrin at home, and it was working very well, not a single bite on my legs arms or torso. My rain hat with netting over it prevented them from getting to my face (and they tried!) but it was my hands which were exposed. I did get a couple bites there, but thankfully Ron was attracting most of the them. Interestingly, the next day, the bites on my hands did not itch the next day .... so while the skeeters came out in high numbers equal to an average summer day in the Boundary Waters, they lacked speed and potency. But we still have another 1000 miles to head north. See what I mean about distances?
Since the skeeters made camping "not fun" we rolled into town for dinner and a beer. On our return, we broke out the Thermacell which, after 30 minutes, seemed to keep them at bay long enough to enjoy a beer. At abou 10pm, still in full daylight, we rolled into bed. And around 10:45 I heard a series of loud bangs ... either someone is a very bad shot or they are setting of fireworks, while it is still light out. 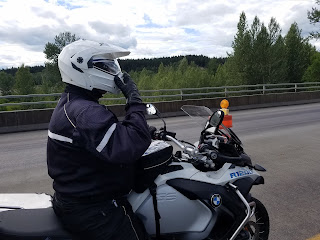 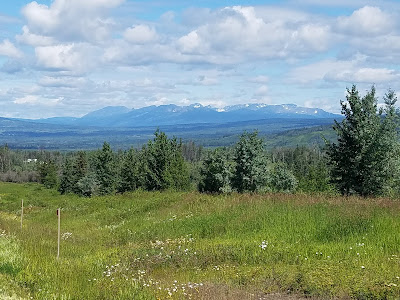 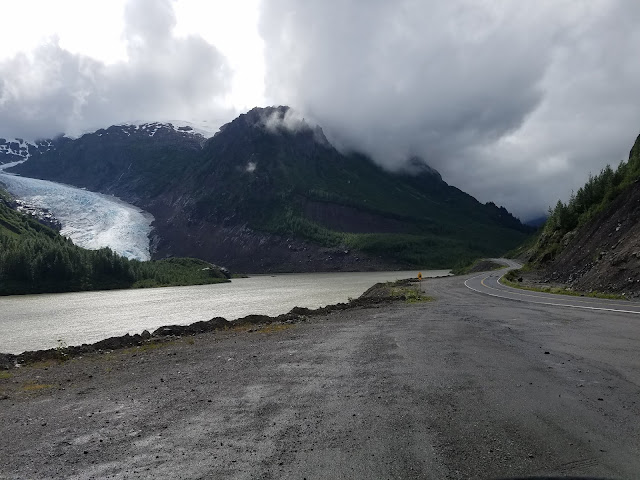 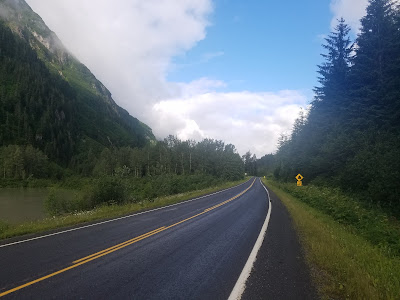