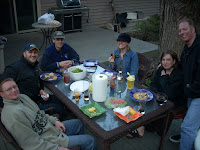 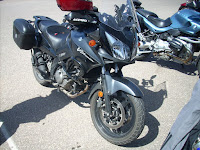 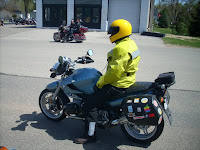 Though we've never been much for the flood run here at the IronWorks club house in Pretty Downtown Red Wing, we get out and ride just the same. If you look hard enough through the Harley clutter, you'll spot some old and interesting iron out there, and a good mix of bikes. (unfortunately, I didn't stop anywhere to snoop around.) All the same, we met at our usual place, Smokey Row Cafe in Red Wing for the pre-ride breakfast and coffee. Christian plotted a route away from the crowds and in the opposite direction of the general flow of Flood Run traffic, which was nice when we came through Maiden Rock as the line of bikes going south on Hwy 35 was backed up for a couple of miles. We hit a little bit of everything, (gravel, too. A GPS shortcut?)before getting on MN. 60 in Zumbro Falls. Roads were in good shape, and had washed off even more thanks to rain last week. After a few more miles, we crossed the river at Wabasha and made our way north to Pepin, and the usual mid-ride coffee stop at Great River Roasters and Cafe where we were to meet Paul, who brought along his father and sister in-law. As Paul had mentioned last week, sometimes riding is not all about squeezing as many miles as you can into one day or riding the fastest and hardest, but it's about getting together and shooting the breeze, and enjoying like minded company. After the ride,it was to Christian and Jen's for homebrew and burgers on the grill. Apologies to Tim, who was stuck with a hot dog.
By Fescue at April 18, 2010