I blame Evel Knievel, doughnuts and adventure for my love of motorcycles. I grew up in the 60s and early 70s when Evel was the god of all that was cool and dangerous. When I’d see his red white and blue bike and red cape flying over a row of cars I became enchanted with anything on two wheels. First my brother and I tried clipping playing cards to our bicycle spokes and jumping curbs and dirt mounds. Sure, we got air, but not “Evel” air- and there was no growling sound. Then, we began to conspire a way to raise money to get our own motorcycle and discovered Spudnuts! Yes, little delicious doughnuts we could sell for a $1 a bag door to door and get .50 profits. Soon the 50cc Broncco mini-bike was ordered and we began riding over and thru everything imaginable. At 9 or 10 years old we didn’t weigh much so we did get air… and lots of road rash from crashing. In a couple years we outgrew the Broncco and moved on to a Yamaha Enduro 125. It was yellow with high white fenders and knobby tires. It wasn’t long before we had the Yamaha’s speedometer red lined in the little stretch of dirt road near our house. We had wheelie and jumping contests and stole a fair amount of plywood from new housing sites for our “Evel” ramps. About the same time my Dad bought a black street bike with seven gears - I think it was a 250 Bridgestone. During the day would take the long black fenders off and put them back on before 5 p.m. when he returned from work. This ruse worked most of the summer until we put the front one on backward and were busted.


After high school graduation I stepped into the big time buying a Kawasaki KZ 650. It was deep blue with a sissy bar and stepped seat. Looking back I took more pictures of that bike than my family or girlfriend at the time. I made it though two years of vocational school still owning the bike but when I entered college I had to choose between it and an education. Education won. Work, kids, a house and an ex-wife followed and for nearly 30 years I was bike less. Then I turned 50 and pulled the trigger on my current bike- a Honda VTX 1300 cruiser.

My bike’s not red white and blue and I rarely wear a cape but when I am riding I feel as free as Evel must have when he flew over those cars and buses in the 70s. 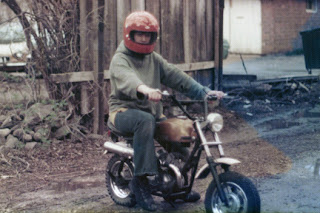