We survived Indy, and we're here to tell you about it.

It appeared to be an omninous start to the Ironworks GP weekend when a wheel bearing on the transport vehicle decided that it had enough; loose and wonky was not part of deal for this trip. Thank God there was an Acura dealer on the outskirts of Rockford, Ill., because it otherwise could have been a long walk through corn country searching for an elusive Honda dealer (Hey, boy, we don't drive no Japanese cars here, you understand? Cue banjo music in background.) Three fun-filled hours later, thanks to an entertaining stroll through the local farm and fleet store where one plastic gorilla was purchased, we were on our way none the worse for wear; the exception being Rob's wallet.
But we made Indy in good measure and discovered our home for the weekend to be an aging Radisson right next to Runway 7 of Indianapolis International.Once comfortably settled into room 657, it twas not long before discovering the Pilot Skyway Lounge at the end of the hall. Hmmmm, this could be of interest. Unlocked, we entered and discovered it to be empy of pilots and home to a nice set of sofas, fridge, giant TV and other ammenities. After determining that no pilot  worth his wings would ever enter the lounge to actually use it, we commandered the facilities as our Ironworks Party HQ. We settled in so much so that Paul spent three nights sleeping generally uninterupted until the third night when some dude, not a pilot judging by his incredibly mismatched clothing, dared to enter. He was some airline lacky who quickly retreated. In the event any true airline staff questioned our presence in the lounge, we all had cover stories;  the best being Paul's: a DC-3 pilot.
Our luck only got better on Friday morning, when Rob, who says "Hi" to damn near everyone, was getting nowhere in conversation with the mechanic on an Italian GP team as he waited in the lobby for his ride to the track. After the team cleared out on a thoroughly dented hotel shuttle van, Rob homed in on the remaining guy sitting in the lobby, working a cell phone and laptop. Fate turned when Rob asked, "You speak English?" A positive response.


We introduced ourselves to Darren, the guy who works travel logistics for GP bigwigs and such. After a brief, "How ya doing?" conversation, we went our way for the day, but invited him to join us later that night for our traditional beer slurping; smart-talk; curse words  and all-round sloppy doings on the hotel's front lawn. Darren joined us around 7 p.m., and then Rob, always working the angle, said, "Hey, can you get us paddock passes?" By Saturday afternoon we had passes in hand and access to the inner workings of the show that is Moto GP...... (to be continued) 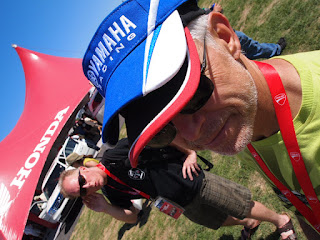