We all trucked over to Northfield last night to see the local premiere of "Girl Meets Bike" on the Carlton College campus. (http://www.girlmeetsbikemovie.com/). During the closing credits we learned that Neal had a huge and significant role in the movie: he was the flagman that started the rally from eastern Minnesota into Wisconsin. (And did you notice there was a nice, fast green ZRX in that sequence, too?) Without Neal's flag waving prowess, the ride never would have started with the same sense of urgency to ride like hell outta Dundas. After viewing the film, it's maker Eric Tretbar, answered questions on the making of "Girl Meets Bike" and hobnobbed with the likes of me. I passed along a Red Wing Ironworks Motorbike Club business card and informed him that if he ever made sequel or another motorbike movie, he could rely on us for extras. There are showings of this movie this upoming weekend at the Jagr Club for the Ton Up Motorcycle Club show on May 18 in Minneapolis, and for our lonely northern member on the outpost of Lake Superior, a showing in Duluth on June 1 at 5 p.m. at the Zinema 2 Theater. 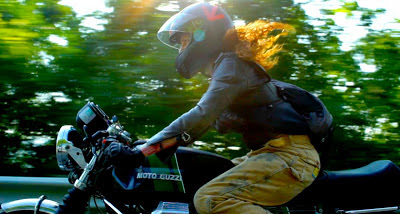