When I brought home the new Tiger 800 last January, my goal was to ride in every month of 2015. Nailed December this afternoon under blue skies and a temp that was a balmy 38-degrees.  A stupid thing to shoot for? Probably. But it just goes to prove that riding motorcycles can be viable even in the "chilly" months. Don't let nobody tell you otherwise, got that? Good. Previously, I have ridden every in month but not 12 months consecutively or within a single-calendar year. Celebratory libations provided by Red Hook's Long Hammer IPA. By the way, the forecast for the rest of the week will be calling for "above average" temps. Yeah buddy, that's what I'm talking 'bout. 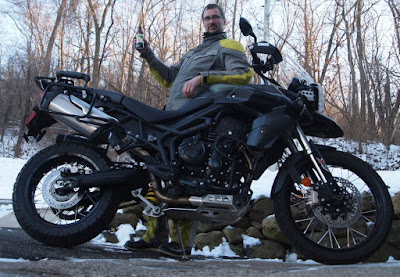