And a good time was had by all in Dennison

We weren't sure what the 2017 Pop-Cycle Derby (GLMC Pop-Cycle derby) was going to bring on Saturday morning; about two inches of snow fell in Red Wing the night before and roads around here were either ice glazed or snow covered. The ride over to Dennison didn't look too promising either as road conditions were horrible. Certainly not conducive for motorcycle riding, let alone a timed derby event. We loaded the bikes anyway and headed out at 9 a.m. At minimum we'd have a beer at the Fireside Lounge in Dennison if things didn't work out. But about five miles out the roads got better and were mostly clear of ice and snow. We arrived at 9:40 to a hand full of bikes. Within minutes, more bikes came in; dual sports, UJMs, sidehacks and a scooter. This was our first time riding this event as it has had an off-and-on history in this part of the state. We encouraged rally master Don Quistorff to host it again next year. All in all, we had a great day in spite of my low speed slide on a slippery patch on a gravel road which resulted in a bent shift lever (the KLX250 crashes well, I must say) and only first gear to go on until the last check point on the first leg. Some creative bending with an odd car tire-changing tool gave back full use of my gearbox, and I was back in action to ride out the remainder of the first leg. All for naught as I knew at that point I would finish dead-ass last, but that's better than a DNF.  Robby and Little Timmy fared way better than I. Jerks. Anway, here is a look at the derby in photos. (Sorry for the low rez shit.)

And I am going to Menard's today to get locking pliers to stow with the dirtbike. These are your best friend on that lonely stretch of road when no one is around. Also, link to Glacial Lakes MC: 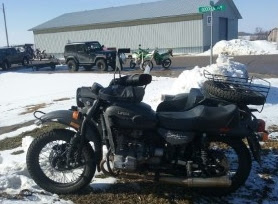 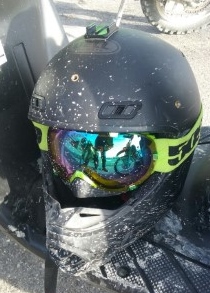 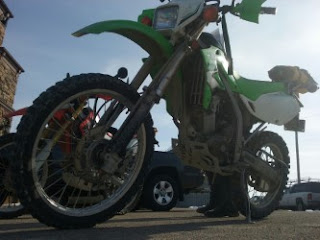