Day 3:
Monday was a travel day, getting around Seattle and that whole morass. We tried to get through Rainier National Park but they wanted $25 each to ride through. No thanks, we'll take the long not scenic way. Noticed that one of the Touratech side case seam is splitting.

Day 4:
I think ... I'm losing track. Which is good.
The day started wet cold and overcast. That just made oatmeal and coffee taste better. The showers were nasty, so no shower.
Not less than a mile from the campround, we found a welder. Ken Orwin had shop next to his house, and was working feverishly on something. But he took the time to weld up the sidecase for us. Total time was about an hour, including removing it from the bike and filling it back up, for $60. I would heartily reccommend him, but I don't remember the name of the shop ...Just Weld It.. ? But his address is about 1411 lakewood road, Arlington WA.
So after that, we got on Hwy. 9 and rode north. It was a nice curvey road with a bit of traffic, and right before we passed through immigration we stopped for a last lunch and a tank of gas. And then immigration.
After a number of questions about where I'm from and where I'm going and how I know Ron and if I was carrying weapons and ammo and ammo and ammo, they pulled us off to the side and we had to go inside. After 20 minutes they again asked about weapons and ammo (twice) and what we're bringing for protection. Bear Spray. No guns. Can they search the bikes? Sure ... and of course they find nothing and they said they usually expect to find Americans toting guns when they go north and motorcycles are eas to search. So we ride on.
Once we get past Frazier Canyon the towns were pretty sparse. Technically we're in the Rocky Mountains but until Frazier they were tall steep and green, covered in a bazillion Christmas trees. But further north it became more arid, like a desert with sage. The moutains continued, now brown. I was very much enjoying the ride, despite the large number of 18-wheelers ... about half of the vehicles.
In Cache Creek we found a nice campsite (Brookside) ordered a pizza and swatted skeeters before the therma-cell got working. And for the record ... TMobile, that red-headed stepchild of US cell providers, works beautifully here. 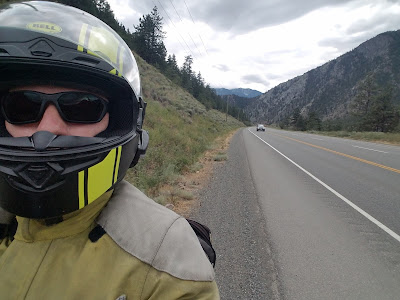 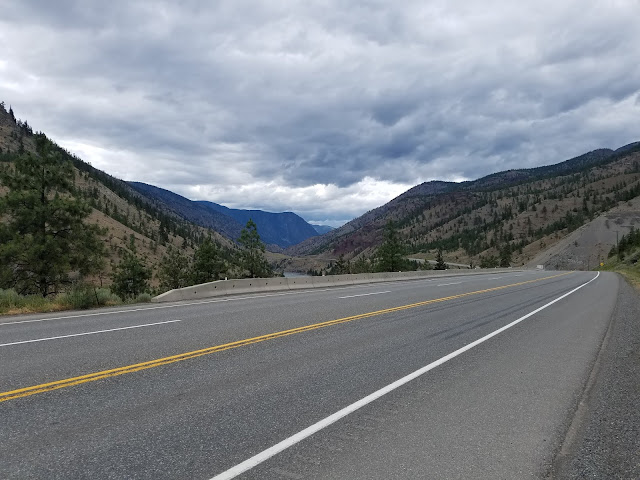 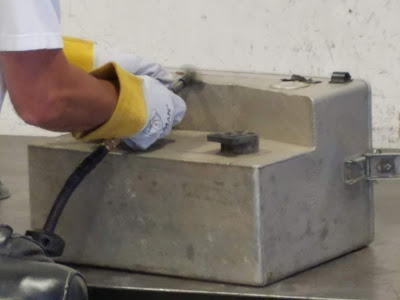