This Just In; The Latest from Tuk

July 15:
This was a tough day. Ron remembered the 400 miles of hwy 4 from Watson Lake to Carmacks was paved. It was the first 50 miles or so, not counting the four miles of wet construction sand. Knowing that it was just a short section, it was kind of fun to practice the techniques I learned at DirtBikeTech.com, especially the part about lightening the front end when it threatens to wash out.
But after those 50 miles of pavement, it turned to dirt. Not bad dirt, but I thought it was just going to be for a few miles. Nope. After 25 miles we stopped to check if we were still on 4 ... and we were .. and the map shows it at gravel all the way to Furo.  About 280 miles of dirt, total. 75% of it was good hardpack;  we could do 45-50 mph, but once in a while there was a slick spot that we had to slow down for.
And it was remote. We saw maybe eight vehicles on that stretch of road. For comparison, 400 miles is the length of Montana. Or Red Wing to Sioux Falls and back. The main highway was on the other side of the mountains, so there was no reason for traffic to be on this road. The remoteness really made me homesick ... it would have awesome if I could have put the trip on hold and be home one day and then resume to trip. But nope, life doesn't work that way, so we just continued on.
Just before the halfway point (Ross River, where we fueled up) we passed a sign "the View - ADVRiders Welcome" (advriders.com is a motorcycle forum dedicated to off-pavement and remote riding). We turned off, rode up a short steep road and found a tiny 'resort' which has astounding views of the mountains. He has had guests from all over the world. We had a ways to go and couldn't stay, but he offered coffee and crackers and a spinach-like dip made from a local plant. If I'm in the area again this is a place to stop at.
After gassing up in tiny little Ros River we continued to Furo for dinner and then on to Camacks. The entire Hwy 4 was scenic, but the last 50 miles to Carmack were fantastic as the road hugged mountains on one side of the river. It was like a one-sided gorge. At ten pm we arrived at the hotel as the sun was setting, and even at midnight it was still light outside. 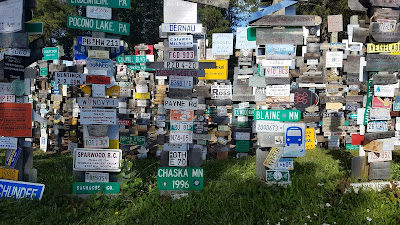 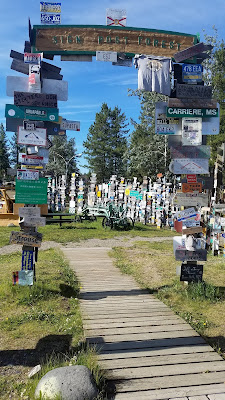