We got up early. The goal was to get packed and out of Portland today, being with little traffic. Ron had already prepped the 2007 BMW R1200GS I was going to use, with new swingarm gaitors and TKC80 tires. I added my heated liner plugin and phone holder, and proceeded to pack most of my crap somewhere on it. The bear vault and bear spray had already arrived and we proceeded to get Ron's new Sena and Inreach set up. By10AM we were on the road!

From Boring we set out on some local roads to get a feel that everything with the bikes were right, and stopped for lunch at the McMenimins Powerstation so I could get a bottle of Monkey Puzzle - whiskey with hops! Then a short jaunt along the historic Hwy.30 through the gorge. We got to see a lot of waterfalls from the seats of our motorcycle, and the gorge itself, but all the parking lots were full so we couldn't park and get photos. One truck had parked where they shouldn't and a wheel dropped off the shoulder and needed to be towed out, which caused a backup in traffic in the other direction. At Bridal Veil we had to leave the highway - the rest to the east was closed after the fire from last year (set by some stupid teeenager playing with fireworks in the woods.) Thus we took the interstate to Cascade Locks. On the way we passed Multnomah Falls and that parking lot was blocked off since it too was full. What good does it to live in the beautiful PNW if there are so many other people living there? Perhaps only the early birds get to enjoy it.

The Bridge of the Gods provided us a way to get over the Columbia River, then at Carson we went north on the Windy River highway. Its' hardly a highway ... a lot of fast sweepers, many tight sections of 5-6 30mph curves, awesome pavement and an Aerostich that suddenly flew open while I was standing. We stopped and managed to get it off - the zipper had failed. We spent about 30 minutes getting it back together ... Ron's sewing skills had us prying open the zipper pull and using pliers to get the teeth back together and then squeezing the pull shut again ... I was seriously thinking, if we an't fix this I'll need to ride quickly back to Portland and then find new riding gear tomorrow (Monday) or a repair shop. But we got it working ... and continued on our way.

The road up to the Windy Ridge lookout of Mt St Helens is a motorcycle destination in itself. The entire 19 mile of FR99 is beset with 20 mph curves and 2000-foot dropoffs with no gaurdrails. The pavement was perfect, except where it wasn't, where the unstable volcanic foundation had caused sunken grades and repairs where the road had fallen away in the past. The final ten miles of the road are in the blast zone, where the 1981 eruption had blown down the trees and covered everything in ash. In the 37 years since the eruption, very little has grown back because there are no nutrients in the ash to support muh vegetation. That means unblocked sightlines through corners, and of the area itself. This is the kind of road that is very difficult to photograph ... maybe a professional photographer can do it, but there aren't many pullouts to actually stop and get photos either.

We were planning on taking the Norway Pass up to Randle to that was closed due to a washout so we backtracked to FR25 and found a campsite a few miles south of Randle. There was no water, so the rate was only $10 for the night. I rode to Randle to get water (and beer and ice) and we chilled for the evening. 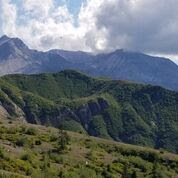 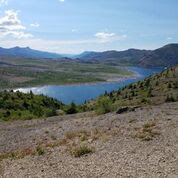 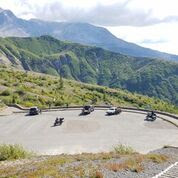